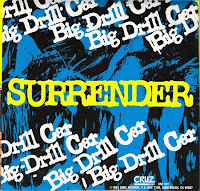 This is quite possibly the first split 7" I ever came into possession of, and boy, what a way to kick off a collection. Two creme de la creme indie-punk bands covering two '70s classics. Although they're one of my top tier favorites, I haven't exactly gone on at length about Big Drill Car on my blog, because as far as I can tell their CDs are readily available, either tangibly of through Itunes. Slightly tiresome due to classic rock radio, soundtracks, etc...Cheap Trick's "Surrender" is nevertheless an anthem of the highest order. Since BDC's sound ultimately had it's antecedents in bands like Cheap Trick, the pairing is logical. While the tempo has been boosted, Big Drill Car's treatment of the songs is entirely faithful. If you're new to them and care to hear more, check out their 1989 debut LP, Album Type Thing. If you're also new to Cheap Trick, shame on you. Incidentally, a tribute album to Big Drill Car was released in 2008. 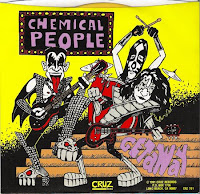 Affectionately referred to by followers as "The Chems," The Chemcial People were labelmates with Big Drill Car, and emanated from the same Southern Cali "popcore" scene. Their recorded output is significant, and ultimately a little uneven when gauging as a whole. Their straightforward take on Kiss' Dressed to Kill cut, "Getaway," more than passes the tribute test however.
Big Drill Car - Surrender
Chemical People - Getaway

This 7" is one of my favorite of all time. The BDC cover of Surrender is perhaps my favorite song ever. My copy is on peach colored vinyl. The number of times I have played it is unmeasurable.

Big DRILL Car's CRUZ Records releases have been out of print for a long long time - although you can find them on eBay - the label stopped manufacturing these long ago. These same records were not available on iTunes until Oct 2008. CRUZ never put them up. I'm referring to:
Small Block
Type Thing
Batch

This by far is one of those situations where I almost prefer the cover over the original! I have this little sucker on both black and custard yellow vinyl. The Chemical People doing KISS is great but the real selling point is BDC!

Thanks, I had to sell my copy not long after buying it off the racks, as I was broke.