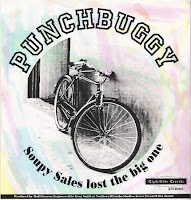 It took me a good seven years or so to track this puppy down, and while the payoff wasn't quite as grand as I wished, it was a pleasure to fill out my Punchbuggy collection with this scarce missing link. Punchbuggy haven't really been brought up on these pages yet, but look for some of their albums on Wilfully Obscure and the weeks and months to follow. Hailing from Ottawa, Ontario, the ever-evolving 'Buggy looked due east to Montreal for inspiration (i.e. The Doughboys). Four very consistent albums were churned out from 1994 on, however it's a safe bet to assume they disbanded after their 2002 LP, The Great Divide. Their side here "Soupy Sales Lost the Big One" isn't exactly the quintessence of Punchbuggy, but respectable. 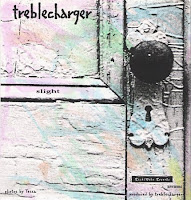 The Buggy's pairing with Treblecharger (later spelled as two words) was fairly fitting, but on Treble's "Slight," mouthpiece Greig Nori's lackadaisical pipes ring tone-deaf to these ears. The band's woozy backdrop doesn't exactly compensate either. Dare I say they're still together? My Treble Charger album of choice is 1997's Maybe It's Me, a polished, power-pop jewel for the ages.

A. Punchbuggy - Soupy Sales Lost the Big One
B. Treblecharger - Slight

yeah punchbuggy! all-night christian rollerskate was a solid affair. i haven't tapped the rest of their output since.