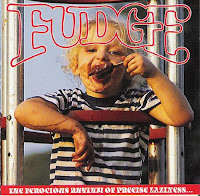 Once you get past the unassuming, and quite frankly, unsightly album sleeve, you will find enshrined on the aluminum disk within one of the finest American indie-pop albums of the '90s, or in fact, ever. I've been putting this one off for a while now, but I can assure you it has nothing to do with the cosmetic facets of this album.


Richmond, VA's Fudge made their presence felt in the early nineties with a trio of singles (to be documented here in the near-future) showcasing a sizable dream-pop awareness, intermingled with the alt-rock rumblings that were occurring right in their own backyard, that being the District of Columbia. Those early 45s essentially served as demos for their 1993 debut album, The Ferocious Rhythm of Precise Laziness. Fudge worshiped at the alter of Ride and My Bloody Valentine just as much as anyone in their league, but instead of unleashing a crush of bludgeoning distortion and done-to-death tremolo trickery, they employed a more easy-goes-it tact, focusing on melody. The album's most notable songs, including "Oreo Dust," "Pez," and "Drive" put the emphasis on sublime harmonies instead of overpowering noise, while applying a much appreciated surreal undercurrent in the process. Ferocious has it's moments of filler (e.g. the loopy bass & drum-ridden "20-Nothing Dub") but nothing distracting enough to defuse the blissed-out vibe of the remainder. In the coming days and weeks, you'll be hearing more of Fudge and it's related off-shoots, but for now, enjoy this stroke of genius from a band that was all too fleeting and ignored.
01. Oreo Dust
02. Jr. High Blur
03. Peanut Butter
04. Mystery Machine
05. Mull
06. Wayside
07. Pez
08. Astronaut
09. 20-Nothing Dub
10. Drive
11. Snowblind
https://www41.zippyshare.com/v/YfnoGBB2/file.html
Posted by spavid at 4:58 PM

Do you have all the singles? If not, I have the Bomp Pop EP, "Astronaut/Drive", "Girlwish/Wayside", and the Engine No.9 single "Sleep/Waterfall".

Been waiting to get around to digitizing them myself, so thanks for doing it! Let me know if you need any of these and I'll send them to ya!

I've got em all. They'll appear on these pages before you know it.

Thanks for putting this up here! I was lucky enough to see Fudge (and subsequently host them) in Athens in late '92. Such a great band. It's a pity they're not better remembered.

Did some surfing last night and came across these posts about Fudge. I am another rare fan of the band's first album, The Ferocious Rhythm of Precise Laziness", and discovered through your comments their early singles. I see several non-LP tracks, but it's my understanding that the recordings on their singles are earlier recordings, and NOT the same as what's on their LP's.

Your blog posts are nearly 4 years old. Do either of you still have those singles? Have you ever transferred them to digital?? Will you guys ever even see my post???

I'd LOVE to hear these single/ep tracks.

I can be reached at either

I'm extremely appreciative if either of you guys respond. Here's hoping to hear from you.

The Netkups link still appears to be dead. When I click the link, it says that the file has been removed due to inactivity. Please re-up when you get a chance. Thank you!

If you're looking for those early Fudge singles, contact me -- I have them, and are happy to send you a copy of them.

I am late to this posting, but have been listening to Fudge since the mid 90s,and would love to hear those singles!

Loomer, you should check out Discogs. Their singles seem to be relatively plentiful and rather affordable. I’ve completed my collection and still have a few bucks. Just know that there are many bands named “Fudge”; they are the eighth entry (8).

It comes right up if you include the album title, then you can poke through the singles entries.

If you wanna check it out, here’s a link to a video of Fudge’s discography that I posted about a month ago. Amazing timing!