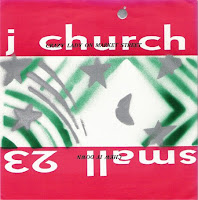 A dynamite pairing if I do say so myself. Two totally archetypal '90s indie-rock acts, thoroughly representative of the period and genre. I've spoken about Small (23) in a previous post for the Fish Hips and Turkey Lips compilation they appeared on, right around the same time as this single. Hailing from Chapel Hill, NC, and sounding every bit like they do, Small's "Chew It Down" is a swift, popcore mindblower, a la No Pocky For Kitty-era Superchunk. Although it's exclusive to this single with a pressing of a mere 500 copies, there was in fact an accompanying video. The lo-fi recording of the song doesn't quite do it justice, but still a 10 out of 10.


J Church were perhaps the most prolific indie band of the '90s, equalled only by Guided By Voices in terms of sheer recorded output. In fact, I own about half a dozen more J Church split singles, some of which may materialize in future Splitting the Difference installments. By and large, J Church, fronted by Lance Hahn, were a punk band with pop inclinations, and their contribution here, "Crazy Lady on Market Street" is about as good a song to familiarize yourself with as any in their oeuvre, but if you've read this far, you probably already know what I'm talking about. "Crazy Lady..." eventually wound up on a J Church singles and rarities compilation album, Meaty, Beaty, Shitty Sounding. More background on this single can be perused here. Hahn died of natural causes in 2007.

re-up possibly? really just any J Church you can find the time to re-up would be amazing. thanks!

I second the comment before this!
J Church & Fluf , As Well!
PLEASE & THANK YOU