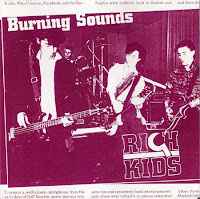 In the latest print edition of Big Takeover magazine (#63 if you're keeping count), editorialist Tim Sommer lays out the notion that the Sex Pistols, had they been a relatively copacetic unit, had the potential to develop into one of the defining rock acts of their time - and not just because they were adept at writing snotty punk tunes. The subsequent endeavors of all four original members, Johnny (Rotten) Lydon, Steve Jones, Paul Cook, (and a soon to be fired bassist) Glen Matlock, included an array of projects such as Public Image Ltd, The Professionals, and The Rich Kids, among others, illustrating that their individual contributions and talents were not fully realized until the most dysfunctional nexus in rock and roll imploded so spectacularly in January of 1978. Lydon was perhaps the most visionary of the group, founding PIL and arguably the "post-punk" genre, as many came to define it, but Glen Matlock would rival and trump "Rotten," if only for a couple years in the late 70s, in the much underappreciated Rich Kids.

Like PIL, the Rich Kids were not the logical successor to the Pistols, and all the better if you ask me. While hardly eschewing punk entirely, the quartet which featured a pre-Ultravox Midge Ure on vocals embraced classic (and then current) British rock with more charisma and class than the Pistols exuded in a calender week. Wasting little time, In 1978 co-frontman/songwriter Glen Matlock, Ure, guitarist Steve New and drummer Rusty Egan quickly broke ground, building on the foundation of The Clash/Heartbreakers' firepower, David Bowie's sophistication, and a lil' Mark Bolan swagger. That same year, the Rich Kids brewed an incredibly potent concoction dubbed, Ghosts of Princes in Towers. It was to be their one and only album, augmented by a trio of singles. There was enough demand for a reissue in the '90s and has largely remained in print since. It remains one of the greatest and most stimulating albums that 99.9999% of the world has yet to hear. The rather enigmatic title track staked out a glorious, par excellence blueprint for mesmerizing and substantive rock and roll, as did other choice tunes like "Bullet Proof Lover," "Young Girls," and and the band's quite literal signature song, "Rich Kids." True blue staying power to the Nth degree some 30 years on.


The now out-of-print Burning Sounds is a plentiful 21-song compilation of demos and outtakes for Ghosts, as well as the Kid's unrecorded follow-up LP. It functions as an enticing appetizer for the uninitiated, and a treat for established customer, although all of the the finalized album versions are superior to varying degrees. Some of the concluding songs, particularly the synth-endowed "12 Stories" were clear indications of where Midge Ure would soon cash-in with Ultravox. Burning Sounds also contains a live version of "No Lip," a holdover from the Pistols era. Nine cuts here later appeared on a "best of" Rich Kids CD, which also contained Ghosts in it'a entirety, and it's trio of accompanying b-sides. Various live bootlegs are floating around as well. Enjoy (or not).
01. Ghosts of Princes in Towers
02. Rich Kids
03. No Lip
04. The Move
05. Empty Words
06. Strange One
07. Bullet Proof Lover
08. Burning Sounds
09. Hung on You
10. Shape of Things to Come
11. Cheap Emotions
12. King
13. Precious
14. Just Like Lazarus
15. Ambition
16. Twisted
17. Tomorrow’s Zero
18. Forever and Ever
19. 12 Miles High
20. Point it to Your Head
21. Silence
https://www106.zippyshare.com/v/7zCVFUIr/file.html
Posted by spavid at 4:03 PM

thanx for sharing this..ironic as i've just picked up an old issue of record collector from '98 which has a nice little feature on rich kids!

Ironically, Steve Jones had shut off Matlock because he like Beatles music and Sid guide Pistols to destruction. Now, they are touring again and Mr. Jones "forget" Matlock's musical preferences. It's money! But Glenn's talent is evident in Rich Kids work. Thanx for sharing this...
Your blog is really good and I added it on my bloglist, could you do the same to my blog? It's http://factor-zero.blogspot.com
Thank you,and keep up the good work

Any chance of a re-up? Please and thanks!

Thank you for the new link.

How I love, love, LOVE the Rich Kids. Echo all that you say here, I've been totally in love w/ them since "Ghosts" came out, finding a used copy at Nuggets in Boston for a measly $5.99(!!). While I'm not a fan of Mick Ronson's production, it's never gotten in the way of pulling it out and playing it LOUD once, sometimes twice a year now for 40 years. "Burning Sounds" is a revelation for fans of "Ghosts".