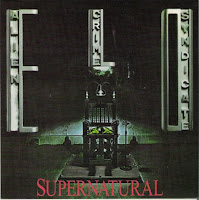 The Seattle-docked Alien Crime Syndicate was the brainchild of Joe Reineke, former frontman for gnarly San Fran pop-punks, The Meices. ACS found Reineke propelling the new project into a decidedly less encumbered stratosphere, giving him more breathing room and a larger canvas to launch a bevy of new-found sophisticated ideas and textures. The approach on their 1999 debut single for American Pop Project Records was more subtle than the lager-than-life dabblings that were to arrive on several forthcoming ACS albums. In fact, "Supernatural" was a veritable ballad held side-to-side with the bulk of raucous songs that comprised ACS full-lengths including From the Word Go, and XL From Coast to Coast. The B-side, "Really Got a "C" is a bit grittier and in my opinion the more preferable cut here. Not sure what compelled them to cop an ELO album cover for the sleeve.


Around the time of this single's release, a five-cut cd ep was quietly issued, featuring an early incarnation of "Trippin' Up to the Clouds," that would be re-recorded for From the Word Go. The disc closes out with a loopy rendition of Jonathan Richman's "Pablo Picasso."
7"
A. Supernatural
B. Really Got a "C"
s/t ep
01. Trippin' Up to the Clouds
02. Here With You
03. You Found
04. When I Get Home
05. Pablo Picasso
7": https://www108.zippyshare.com/v/zdxDixum/file.html
ep: https://www108.zippyshare.com/v/3hCRoIm6/file.html
Posted by spavid at 6:06 PM

I recently came accross your blog and have been reading along. I thought I would leave my first comment. I dont know what to say except that I have enjoyed reading. Nice blog. I will keep visiting this blog very often.
Marian
http://dclottery.info