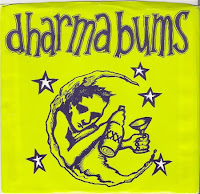 The Dharma Bums were a Portland, OR based combo who dished out a trio of long players in the late '80s to early '90s. Relatively linear for the "college" circuit, the Bums opted to pursue a no-frills tact when it came to thier brand of rumbling, yet often sweetly jangly guitar-rawk. Kurt Cobain was a big proponent of the band, although he was wont to name-drop the Vaselines and Raincoats exponentially by comparison. The allure of the dayglo-green clad sleeve of the 7" in question, wasn't so much the grungy a-side, "Givin' In," rather it's flip, a remake of the Flamin' Groovies iconic and invariably gratifying "Shake Some Action." 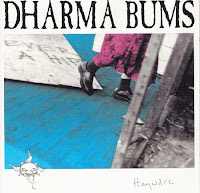 Hey cool this band rocks. Ive been looking for this cd in soulseek but i only find kerouac stuff

Any Chance for a re-up of Haywire?

Haywire is now available on iTunes and Amazon. I'm afraid if I share it again here those gentlemen will be very angry with me.

Oh ok, thanks for the heads up. Did not realize they were available!

I only updated the singles. The albums are available again online.