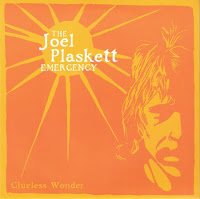 In the mid-to-late '90s, I immensely enjoyed following the progression of a Halifax, Nova Scotia band called Thrush Hermit, and perhaps more specifically their vocalist and guitarist Joel Plaskett. Starting out as motley crue of indie-guitar rawkers who eventually honed their craft into something a little more refined, and a lot more endearing, I was saddened to learn of their split after their second album, 1998's Clayton Park. I was in luck however, thanks to Plaskett forging ahead with a new combo, The Joel Plaskett Emergency. Having released a previous solo album, the somewhat cobbled together In Need of Medical Attention in the final throes of Hermit, it was clear that Plaskett had truly emerged as a mature singer/songwriter with TJPE's 2000 stunner, Down at the Khyber, bearing all the evidence anyone could possibly need.


A relatively hard to find import single was released in conjunction with Khyber, featuring the lucidly soaring and empathetically beautiful "Clueless Wonder." Love the Jimmy Page-style guitar bend in the chorus on this one. The flip-side featured two non-lp goodies, a bratty kiss-off, "Please Don't Return," as well as an unlikely cover of R&B crooner Irma Thompson's "The Hurt's All Gone." Nice and even more nicely done.
A. Clueless Wonder
B1. Please Don't Return
B2. The Hurt's All Gone
http://netkups.com/?d=2c95e64942b15
Posted by spavid at 6:35 PM

this is one of my favourite songs of all time!