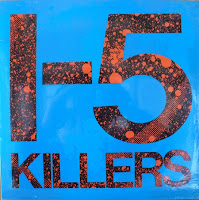 Given the Dharma Bums kickoff this compilation of Portland, OR (and thereabouts) artists, I thought it would be a fitting followup to my recent post on them. As "scene reports" go, the burgeoning indie movement in this particular corner of the Northwest, circa 1990, was just about average, but would improve exponentially in a couple years down the road with excellent newcomers like Pond, Sprinkler, Hazel, Heatmiser/Elliott Smith, and dare I say Everclear.


In an event, the Bums rather raucous contribution "Initial Explosion..." harkens back a bit to Twin/Tone-era Soul Asylum, and as far as I know remains exclusive to this disk. The Wicked Ones, Confidentials, and Blubinos offer slightly differing variations of garage/bar-rock. Crackerbash (as previously noted on these pages) conjure up a slice of fuzzy, noisenik goodness that never made it onto their albums or singles.


The Whirlees "Didn't Bat an Eye" is a long-winded, seven-minute number, that's eventually worth the time invested. "Indecision Sure," courtesy of The Webbers, is a hardy riff-rocker that somehow manages to bridge the divide between George Thorogood and The Smithereens. Cacophonous, cult faves the Hellcows draw I-5 Killers to a close. There would be second and third sequals in the I-5 compilation series, both of which are available from CD Baby. This initial installment appears to be vinyl only.

Thank you. I just bought both the Vol 2 and Vol 3 of the series at my local record shop for a buck each. They got some great tunes from local artists from the early 90's.

Can you reupload this please?

reup please this one. Thanks!