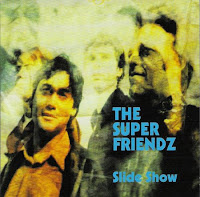 Halifax, Nova Scotia's (and later Toronto's) Super Friendz were coming from the same place, figuratively and literally as Sloan. Slide Show, the second proper Super Friendz album, saw the light of day on the Sloan owned and operated Murderecords in 1996. Unlike their debut, Mock Up, Scale Down, Slide Show received major label distribution throughout Canada via Universal.


I suggest that the Friendz are coming from the same place as Sloan in that much of Slide Show exudes the lived-in glow and empathetic leanings of Sloan's generously praised 1994 release, Twice Removed. Pensive and literate, this album's most affecting moments including "Up and Running," 'Prattle On," and "Forever a Day," conjure up enough warmth to arouse the hopeless romantic in all of us (except for perhaps Dick Cheney). Things trail off a bit on the latter half here, but ultimately Slide Show is more than recommendable.


The band's somewhat punchier debut album, the aforementioned Mock Up... and a sweet 10" followup ep, Play the Game, Not Games, were condensed as Sticktoitiveness for US issued in 1997 on March Records, making it the Super Friendz lone Stateside release. All of this stuff is available used at reasonable prices on Amazon.