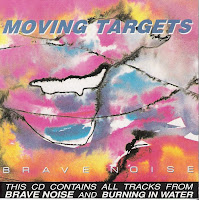 Minneapolis had Husker Du, Chicago gave rise to Naked Raygun, and Boston, MA spawned the Moving Targets. This now scarce CD collects all the tracks from their first two records, 1986's Burning In Water, and Brave Noise from 1988. While on these albums the Targets didn't quite pack the anthematic moxie of Naked Raygun or the tuneful acumen of the Twin Cities "Fab-3," they were off to a nonetheless superb start.


Head-honcho Ken Chambers did some moonlighting during the late '80s in another bruising Beantown punk troupe, Bullet Lavolta, but managed to eke out a couple more Targets albums, including their high watermark, Fall in 1991, and the nearly as solid Take This Ride two years later, which would wind up being the final word on the band, save for some reunion gigs. All of the Moving Targets albums were minted on Taang! Records, still in operation, and from what it appears, Fall and Take This Ride are still available. Vinyl rips of these albums have popped up on other blogs, but I thought I would do them greater justice by sharing my flawless CD version, which I think might even include a couple bonus cuts.

Thanks...espacially Burning in Water is one of my favourite albums ever. Nice, raw and recorded with hearable fun... Cheers Schrottblogger

Thanks a lot for this. I was looking for some Moving Targets desperately.

nice, Burning in Water is a long lost masterpiece

"Burning in Water" is a classic!