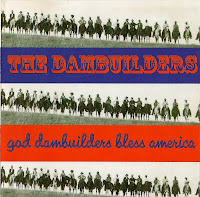 The Dambuilders were a band on a mission - namely to write and record a song about every state in the union.  Or if not about, somehow related to or loosely involving every state.  Or if not relating to any specifics on any given state, at the very least incorporating the name of the state in the song.  Or if not that, at least featuring the state name in the song title.  Confused?   In a nutshell, this violin-inflected Hawaiian by way of New England rock troupe did not in fact release 50 "state" centric songs, and to my knowledge they probably didn't getting around to committing said number to tape either. God Dambuilders Bless America was an 1996, Australian issued compendium of most of the band's "state" songs.  The bulk of these appeared on officially released Dambuilders records, including the much lauded Encendedor.  Bear in mind, these aren't official state-songs, and in almost every case, nothing is revealed in the lyrical content about a particular locale.  In short, if you're a fan of crunchy, idiosyncratic indie-rock, and if you happen to be an aficionado of the aforementioned Encedendor or even early 'builders endeavors like Geek Lust , you'll want this.  A hearty thanks to John for hooking me up with all these files.

Many moons ago I stumbled upon your blog the other albums of The Dambuilders (I think it was 2008). Is it quite possible that you can re-up "God Dambuilders Bless America"? Please, please, please.

Thank you so much for sharing such great music. Hoping that you find the time to grant my request.

i second that request. i ave searched for this album many times and always end up on this site. fingers crossed.

Thank you! Looking forward to your insightful posts as always