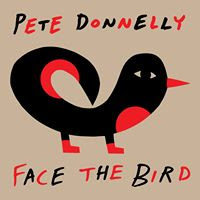 The Figgs are one of those rare and unlikely rock and roll breeds who consistently benefit from the songwriting contributions of all of it's roster mates, both as a four-piece in the early/mid '90s (with the now absent Guy Lyons), and pared down to the current trio of Mike Gent, Pete Donnelly and Pete Hayes.  Kicking things off in the late '80s under the name Sonic Undertones, The Figgs have slogged through a quarter century of club gigs, released in the neighborhood of one dozen full lengths, almost as many 45s, and have intermittently served as Graham Parker's backing band - all while accumulating an audience of tried and true believers, one fan at a time.  Gent and Donnelly are the Figgs most accomplished songsmiths, and as such it shouldn't come as a shock that they have creative outlets outside the band.  Thing is, Mike Gent has been the far more prolific one of that pair, issuing three LPs with his fittingly named spinoff combo, The Gentlemen, and just as many disks under his own name.  Slowly but surely, Pete Donnelly is catching up, and is doing so in style with his second proper disk, Face the Bird.

Upon even the briefest examination (30 second samples on iTunes if you must), ...Bird takes the listener on a tremendously varied flight, diving in, out, and around a myriad of genres - virtually the antitheses of any given Figgs album.  In a solo context, Donnelly is demonstrably more nuanced and lucid, adopting a sonic penchant that affords his songs exponentially more breathing room than the often volatile power pop of his main gig.  I hasten to use the term "solo," as Pete receives no shortage of accommodation from a slew of backing musicians - and one particularly special guest, Shelby Lynne who contributes vocals to ...Bird's arguable centerpiece, "Got Caught Up."  Robust and assured, this tune could pull it's own weight in radio-ready gold, but I don't think our man intends to play that game.  Let it be known that "Always Something" shares a similar ambition quotient.

The sheik, cosmopolitan groove propelling it's way through "Delicate Elocution," is another sublime departure, while a more wistful tone is struck on the acoustic "A Thing of Two," and the nearly as spare "Low Flying Planes."  "Toodle-oo" merges bluegrass textures with snappy lounge pop, and a bevy of clever keyboard juxtapositions infiltrate the concluding "Yet to Be Made."  Some amusing interjections from Pete's kids add to the unpredictable but thankfully rewarding anomalies of Face the Bird.

For a limited time, I'm offering a brief taster below, but for the main course, move thy mouse in the direction of Pete's store page, and soon to come iTunes and Amazon downloads.

Hi Spavid,
Please could reupload this post?, thanks.
buckeye