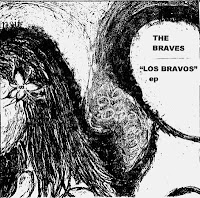 By the time I caught wind of The Braves, Rockford, IL's greatest export Cheap Trick, I had missed their first ep, Los Bravos, which functioned as an appetizer of sorts for their phenomenal 2003 platter, That's the Hot Part.  When the noisome but jangly five-piece rolled into town in 2004 (or thereabouts), I approached them about obtaining a copy of Bravos.  Not surprisingly, this was a self-released demo of sorts that had sold out, but one of the Braves was kind enough to send me a CD-R copy.  The artwork presented here is black and white, though I can't vouch for this being the actual color scheme, as I was furnished with a photocopy (not that I'm complaining).

Six fleeting cuts are presented here, including an early take of the passionately melodic "I Am a Patriot," which later found it's way onto That's the Hot Part.  "I'm a Sad Girl," bears one of the most delicious hooks the Braves ever put their stamp on, but it clocks in at only a teasing 50 seconds.  A faithful cover of the Velvet's "Candy Say" closes this affair out with class.  If you're curiosity is piqued, click on the link in the first paragraph to learn more about the Braves, and download ...Hot Part.  Braves vocalist Joe currently fronts Wire Sparrows, while his former bandmates have embarked on La Historia.