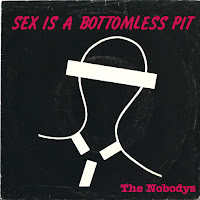 Despite landing a major label deal in the mid-80s, and logging airtime on MTV and Miami Vice, The Nobodys sadly remained true to their namesake.  Originally hailing from Davis, CA, the quintet helmed by the impeccably monikered Safeway Goya reside on the snarkier end of the new wave continuum, but bore a sound that was plentifully accessible.  The Nobody's owed a small sonic debt to Devo, sans the robotic schtick that never did squat for me.  Fun, but thankfully not frivolous.  The single in question contains two songs that did not appear on their lone 1984 LP, No Guarantees.  The album might still be yours for the taking at New Romantic Rules, and a short history on the Nobody's can be read at Wiki.

A. Sex is a Bottomless Pit
B. Boiling in the Melting Pot

Is there supposed to be an apostrophe in this band's name or not?

No - it's sans apostrophe on the label of the single of theirs I bought.

To spdavid - thanks - I bought 'No Guarantees' back in the day and always considered it a lost hit.

I have heard more of their album and his voice is a little annoying.

It's good to hear something else.

Yes, my bad on the punctuation. Glad I was able to share a little something more by these guys.

Hey, would you be able to re-upload the file somewhere? Thanks!

Hi, any chance of a re-up? Thanks!

now we awaiting the lp with the wonderful 'I Am Helpless Without My Computers' next time ?