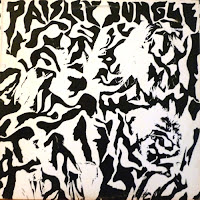 Paisley Jungle were not headquartered the trenches of the "Paisley Underground" epicenter of Los Angeles, and conveniently for them, they didn't subscribe to that particular neo-psychedelic motif.  As it turns out, this Connecticut quartet's thang veered straight into the alt-rock/left-of-the-dial strata.  No synths or guitars, believe it or not, but rather two basses - the more conventional variety operated by Kara Krane, and a piccolo bass employed by Steve Swan.  As far as Paisley Jungle is concerned, Swan's piccolo bass could pass for a six-string axe at any given moment, producing no shortage of sweet jangly reverb.  Paisley's other indigenous trait would be frontman Paul Brockett, whose sardonic wit was colored by a timbre that negotiated a compromise between Stan Ridgway and Peter Murphy.  Sorta.  A sincere pop acumen informs "Old Fashioned Meal Ticket" and a punkier panache works to great effect on "The World."  A cover of Brian Eno's cult fave "Baby's on Fire" blends in seamlessly and caps off a fun outing.  My apologies for the vinyl noise.

I especially like the LP jacket creativity. It comes with a transparent insert that you place on the album cover to reveal the four hidden band members faces…very cool and creative!

Really? I don't think my copy did. Then again, I bought it used. Will take another peek inside the jacket... Thanks for the heads up.

Just picked this album up. Mine came with the plastic insert. Very interesting and quite the puzzle.

these guys had a killer live show as well, very stylish. My band opened for them a few times.

Oh yeah- great live band! Saw them open for Public Image Ltd. in late 86' rumor has it Mr. Rotten himself asked the Paisley's to join them on tour!

Finally tracked down the LP to replace a worn out self-made cassette. Did any of the band members do anything after this record? Always loved this one ...

You can see the "completed" version of their LP jacket on this page. [http://www.newlondonrocks.com/wiki/index.php?title=Paisley_Jungle]

I believe Steve Swan is still playing with a band called D.O.T.

Any chance of reposting? Thanks.

Any chance of reposting? Thanks!