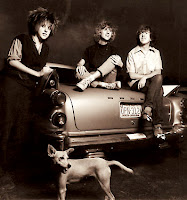 Sunday night I received word that Let's Active's original bassist and founding member Faye Hunter had died at 59.  It was particularly troubling to learn of the circumstances surrounding her passing, which hits frighteningly close to home for me.

For those of you who interface with us on a regular basis, you've likely seen several posts I've dedicated to Let's Active in the past, whether or not pertaining directly to them, or the myriad of artists who have fallen within the orbit of producer/frontman Mitch Easter.  Nationally, Let's Active made a very modest dent during their 1980s tenure, but beyond the confines of their own career, the band's wry and endearingly odd panache informed a generation of indie-rock hopefuls, particularly on a regional scale.  A good case in point would be the Sundowners, who I coincidentally featured a mere two days ago.  L/A's indigenous aesthetic made some serious, not to mention intoxicating ripples.  Consciously or not, I've scattered many of those reverberations around (run a query for Let's Active or Mitch on our page to see what I mean).

In 2010 I posted several Let's Active demos (dating from 1983-85) to fairly good reception.  Upon hearing about Faye, my initial reaction was to share another set of demos that they cut in preparation for the third and final L/A album, 1988's Every Dog Has It's Day, however I was quickly reminded that she left the lineup a few years prior.  Will save those for another time.  In their stead is an FM broadcast of a Chicago performance in late '84, which I believe was Faye's last leg of Let's Active dates before exiting the band.  A veritable dream setlist.  In a rare deviation from my usual MP3-only shares, I'm also offering this one in lossless FLAC-ophonic sound, for the more discriminating audiophiles in the audience.  Enjoy.

Hang in there, chief.... Her passing has got me down too.

Great post. Unfotunately, I have it. Did want to thank you for Monday's post. I've been looking for that. Even better than I had heard. By the way, the new live release is superb!

I do have a little bone to pick with you. This is in reference to a recent post of yours, regarding a lack of musical talent coming out of my beloved hometown of Rochester. Did you forget The Chesterfield Kings, Lydia Lunch, Lou Graham of Black Sheep and Foreigner, Duke Jupiter, Chuck Mangione, Wendy O Williams of the Plasmatics, etc.? :-)

In that vein, I have something here that would make a great Mystery Monday post for you. If I've piqued your interest, let me know and I'll send you a private note about what I have. I have your email add..

I didn't say lack of talent, but notoriety. Besides Foreigner and Chesterfield Kings I had no idea the other ones you mentioned had ties to Rochester. Looks like I just got schooled Oxy, and I couldn't have asked for a better instructor!

Email me via the address in my profile. Thanks.

So you have some Every Dog demos!? I know there are some Every Dog songs that had been demoed for Big Plans but I've never ran across any actual EDHHD demos. Those would be cool to hear. Don't have a copy of Strike While The Iron Is Hot by any chance?