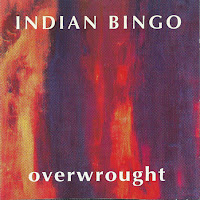 This is the not-so-spectacular follow up to Indian Bingo's relatively spectacular Scatological which made it's way onto these pages a couple weeks ago.  Less focused than it's predecessor, Overwrought doesn't necessarily live up to it's title, but that's more pro than con.  Still sounding a helluva lot like Nice Strong Arm, Indian Bingo hit a demonstrably more lucid stride here, particularly on the delicate "Ice Cooler" and "Worm," the latter containing a bit of dialog from Charlotte's Web.  Conversely, the proceedings get downright aggressive on the muscular opener "Ramos," and later, "Porcelain."  Jazzy guitar melees spice up "My Leg's Numb" and "Father Thinks the World of Me," but at the end of the day the debut wins out. Feel free to read what Allmusic had to say.

I thought all of the good music blogs were dead, glad to see there are still one's like this going strong, great job here & thanks! Glad to relive my teenage years through this music. btw is there any chance of a re-up of the "Various - Why Do You Think They Call it Pop? (1994)" disc? http://wilfullyobscure.blogspot.com/2007/09/various-why-do-you-think-they-call-it.html

I'd love to hear it if so, anyways keep up the good work!

Thanks for the IB follow up Spavid. You're the man!

Will try to get the link for WDYTTCP repaired later this weekend.

reup please if possible. Many thanks!