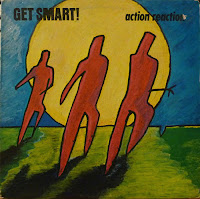 Well if this isn't quintessential college rock, than I don't know what to tell ya.  Many moons ago someone emailed me with a friendly suggestion to investigate Get Smart!  For better/worse, it took a couple years to accept that invitation, specifically when I happened upon Action Reaction at Jerry's in Pittsburgh last fall.  GS's origins were rooted in the unlikely locale of Lawrence, KS, but it would appear that by the time this disk was tracked the co-ed trio had relocated to the considerably more happening Chicago.  Brandishing skittish rhythms and post-punk angularity in spades, Get Smart possessed something resembling a poppy undercurrent as well, not unlike numerous contemporaries I'm inclined to compare them to: X, Mission of Burma, Pylon, and to a lesser degree even the Wipers and the Embarrassment.  As mentioned in my intro, Action... skews squarely to the left end of the radio knob, and as it would appear they didn't make much headway beyond that particular market.  A second album, Swimming With Sharks, was launched in '86.  You can check out a complete discography here.

Jerry's in Pittsburgh, eh? Where do you live?