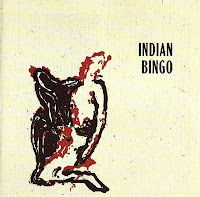 I'm puzzled at their choice for the album title, but one thing I'm certain of is that I know a good album when I hear one.  In fact, Indian Bingo's Scatological is better than good.  Released on Independent Project Records (former home to Savage Republic and For Against) the album had a more than appropriate roost.  Dark but not doomy, and deep without noir pretensions, Indian Bingo delivered tuneful, echoing guitar leads and a crackling rhythm section, all smoothly threaded with a modest, post-punk subtext.  Scatological's air of sweet, minor-key melancholia suggests admiration for several of their sub-rosa contemporaries, namely Springhouse, Fire in the Kitchen, and Nice Strong Arm/Timco.  Some occasional artsy tangents keep the proceedings all the more interesting.  It's a swank collection that spans from scalding fireballs ("The Ulcer Prophecy") to billowy ballads ("Goon Lagoon") and plenty in between.  A huge thumbs up.

Six-stringer Phil Carney eventually migrated to the Red House Painters posse.  A less enticing follow-up LP, Overwrought materialized in 1993.  A nice piece on Indian Bingo can be read at the Record Robot.

I like this band, already have this one. Is there any chance you might have that 5 song Indian Bingo ep or possibly have Babe or Overwrought in your arsenal.

I just have Overwrought and can get it up in the near future. What was "Babe"? Another album?

It was indeed an EP:

I think Babe's a cut on that 5 song ep now that I come to think of it. Sorry for the confusion as I actually though that "Babe" was another release for a momment there.

Ok, I did my research, The self titled 5 song ep from 1993 has the word "Babe" on the cover. There's no song called "babe" in the tracklist ...now I've got that Sony and Cher song in my head, oh no.

Thanks for the clarification David.

Now I've got STYX in my head.

"I'm puzzled at their choice for the album title, but one thing I'm certain of is that I know a good album when I hear one. In fact, Indian Bingo's Scatological is better than good."

Totally agree. I love this album. It has a weird kind of haunting, mysterious vibe/undercurrent to it.

I ordered Overwrought from the band directly by mail in the 90's. In my order I included a note telling them how much I loved Scatalogical. I got back the new CD, along with a note (I think from Mike, the singer) that said they actually hated Scatalogical and that their new one was much better. Like you, I was underwhelmed with Overwrought. Maybe they should have named it Underwhelm.

It never ceases to amaze me how certain bands seem to be oblivious to their best work. U2 springs to mind in this category. I doubt they'll ever do another album with songs that are as fundamentally odd and un self-conscious as the songs on War. It's a lot stranger album than most people think.

Does anyone know this band is from?

The band originally formed in Los Angeles, but then moved to San Francisco. Most of their recordings, the album "Overwrought", the single "Vomit on your coffee table" and the final release, the self titled 5 song EP were recorded in San Francisco.

reup please if possible. Many thanks!

I made a playlist of it on youtube. Indian Bingo - Scatalogical: https://www.youtube.com/playlist?list=PL43kS7n_kzLyZykqdNMBH66qm0NXOh3po

My first internet search (at my dad's office) and purchase was this LP. Later thankfully found a CD copy. Hard as crap to find on any format Took me years.

Cool you got it through them, took me years to find. Ended up getting their others much easier. Supposedly like Toad the Wet Sprocket it was a record label thing. This is their best album. It is haunting.

Thanks for keeping this here. I got this CD at Camelot Music back in 1996 for $1 in the cut-out section, as a teen. All these years and probably 1000 records later, Scatological is in my Top 10 ever. Subsequent albums by Indian Bingo are good but don't have the same magic.