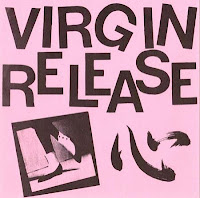 A good many of you took to the Marshal Fields album I shared in January, and for good reason as far as I'm concerned, given their ample talent.  Low and behold a couple months ago Fields guitarist and songwriter John Mac got in touch with me, and was more than patient to indulge my inquiries regarding the band's history and such.  Part of that story was rooted in a Marshall Fields precursor band, Virgin Release who issued this 45 in 1983.  Essentially four-fifths of M/F (minus keyboardist Brian Gary) Virgin Release set to tracking these two cuts just as key songwriter Eric von Radics entered the group's lineup.  Judging from the band photo gracing the back sleeve of this single, the four gentlemen in question look all of sixteen, seventeen, possibly younger.  V/R's sonic motif was notably more economical than that of Marshal Fields rich, layered finesse.  Every parent's plea, "Turn It Down" offers modest proto-punk tinges, circa 1976 New York.  Straight up adolescent garage rock that seals the deal in two and a half minutes.  In the same span of time the boys kick out the boppin' "Hey Now!" a throwback of sorts to the Merseybeat pop that I'm sure they were lovingly weaned on.

Thanks for the review! Mac and I were just out of college when we recorded these. The rhythm section was done live and guitars and vocals tracked later.