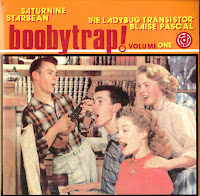 I was dazzled by the Starbean track "No Earthly Means of Transportation," that commences this double 45 compilation when I first got a whiff of it on CBC radio at some point in the mid-90s.  Problem, was, I finally found a copy of Boobytrap about ten years too late, and by then I hardly recognized it.  Aficionados of twee, Moog-driven "space pop" are likely to do well by this song.  The flip of the Starbean side features Saturnine, a far greater known commodity who issued a healthy slew of albums that didn't abate until the 2001's fine Pleasure of Ruins.  Their contribution, "Compromised" is anything but - a little meek perhaps, but quintessentially indie pop with some hard-strummed jangly bits and a good dynamics.  Believe it or not, I haven't head anything by The Ladybug Transistor outside of this record.  "Your Walling Tail" plagiaristicaly plunders Pavement's slower moments circa Slanted and Crooked.  No complaints from this end, though I have ever to wonder if this was Ladybug's calling card back in the day or just an anomaly.  Hmmm.  May have to investigate further.  Although they don't owe much to Malkmus and Co, Blaise Pascal bring on Boobytraps! real slack attack, via the tweaky, anti-climactic "Shielded."  I can think of a hundred bands from this era that would've been far more deserving of these grooves than BP, but of course, I didn't have any say in the matter.  Enjoy (or not).

I haven't listened yet, but from your description of the Ladybug track, it sounds more in line with the Sunhead record before they morphed over to LT. LT albums are wonderful Left Banke-inspired orchestral pop; I'm sure you would like it.

Thanks for tipping me off Ostrakos. Sounds like I've got some good listening in store.