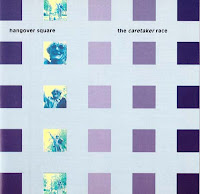 In a 1990 interview Harriet Wheeler and David Gavurin of the Sundays informed TV viewers that prior to signing a major label record deal they participated in a battle of the bands in their native UK, going head-to-head with this troupe.  If memory serves, The Caretaker Race walked off with the prize, but ultimately it was their competition that made the grade.  I was curious to investigate this quartet of also-rans, so to speak, and got a deal on their Steven Street-produced Hangover Square CD that I couldn't pass up.  Unlike the Sundays, C/R weren't Smiths proteges, yet I could certainly see them siphoning an audience from Mozz's pool of fans.  The band's modus operandi tilted more in the direction of the Go-Betweens, and to a much lesser extent the C-86 vibes emanating from the likes of the Close Lobsters and Mighty Lemon Drops.  Nothing heavy handed mind you.  The occasionally uneven Hangover... isn't without it's fair share of pure-pop decadence, arriving in the form of "I Wish I'd Said That" and "Anywhere But Home."  The fiercer "Gun Metal" and "All Love Offers" explore the other side of that coin.  In addition to this main course, the Caretakers released several tracks from Hangover Square as eps and singles.

Any chance of a re-up of this one? I have an EP of theirs, which is great.

Hi, can you re-upload. Thanks

please kindly re-up this one..thank you in advance..