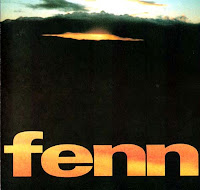 There probably isn't a hell of a lot I can tell you about fenn, other than that they were actually Scottish, not Spanish.  Ensconced in their lineup was one Luke Sutherland, who eventually went on to be the prime mover in Long Fin Killie, a band I never quite got the gist of.  Spanish (fenn's lone full length from what I've been able to discern) yields ten slices of noisy indie rock drawing from such rich, feedback-ridden watering holes as Swervedriver, Loop, Bailter Space and even American legends Bitch Magnet.  There's plenty more comparisons I can rattle off that are doubly arcane, including the mildly tuneful Cars Get Crushed, Rein Sanction, to name two, but those likenesses are almost certainly coincidental.  fenn's swirling sonic density can't be understated, but neither can their surprising approachability.  These folks must have been absolutely concussive in a live setting.  If there are any other records by them that are worth investigating please let us know.

very cool - thanks for turning me on to this!

I have a signed copy of that on vinyl.

Have seen www.actionrecords.co.uk have all of Fenn's back catalogue brand new for a good price! Including the numbered signed vinyl copies.

This record is awesome. Thanks!

I saw this band in king tuts in 1993 supporting the pastels and lungleg,they absolutely blew them off stage amazing.
I am sure they are responsible for mogwai's sound.

I was in Fenn:-) Nice to see this tiny acknowledgement of the brief, pre-web time we were together!

Myself and Richie - Fenn drummer and the heart of the band - are back jamming again, so who knows, we might bring some thrashy Fenn stuff back to life one day.

Hey Ewan. Sorry I was so tardy in response to your comment. Glad to hear you might be making a comeback. Keep in touch.