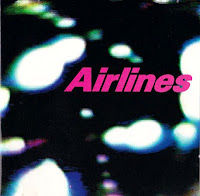 This is a request and a follow-up to the Airlines tape I put up last month.  Unlike today, the nineties never struck me as an era of legit post-punk revivalism (unless you want to count a few random Elastica singles), but if such a movement had been afoot, I'm sure these guys could have more than held their own.  Owing a debt to the Feelies just as much as Mission of Burma, Airlines wrapped dextrous, sometimes challenging guitar lines in a fuzzy sling of warm reverb, achieving nearly sublime results on "Remote Color," "Weekend," and "Talking About Talking."  In fact, nothing on Airlines is a let down, but if you're not well versed with the likes of Television, Versus and the aforementioned, this album could pose itself as a bit of a grower.  This is what Big Takeover magazine had to say about it:

Add Airlines to the list of promising New York bands (at last there is a small crop). Theirs is a sprightly minimalist pop, the occasional one-chord drone uplifted by loping bass, bopping snare hits, and caustic guitar lines that encircle that steady bass. The playing is crisp-former KRAUT producer RYK OAKLEY gives them a tight mix-and simple but effective ideas run all over spaces this economical quintet leaves. Like the late `70s Wire, to whom they might be compared (as well as all the U.S. West Coast pop minimalists they inspired, such as the Urinals/100 Flowers, Sleepers, Flyboys, later Middle Class), nothing is chunky, yet the sound has depth, and the post R.E.M./Libertines plucked guitars never fail to invigorate and take unexpected paths... Investigate.

An endorsement from The Big Take-Over means only very rarely disappointment.

Thanks. I will check it out.

As a fan of The Feelies and Mission Of Burma I gave this a listen. I liked "Steady Goes" and "Talking About Talking" but the rest sounded non-committal with a psychedelic pop feel. What was that clicking sound throughout?

The clicking is part of the rhythm track, not a glitch. Didn't really notice until you mentioned it Emerson. Thanks.

Did you ever check out the 2nd CD by Lincolnville (led by Colin Decker)? I got it after a long ago rave commentary on the great, great, great music blog "The War Against Silence" and I really like it. I mention it here because the guitar and vocal sound of the first track somewhat reminded me of it -- although Lincolnville is a little more intense.

When you do your next round of reuploads, could you possibly include this album with them? Thanks.