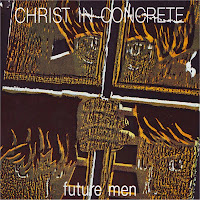 Until I get the opportunity to rip some more wax, I thought I'd share another album that I downloaded a few years back from one of my favorite defunct music blog, Feelin' Kinda Froggy.  From what few details I've been able to glean online regarding this Dutch trio, Future Men was released either in 1986 or '87.  Christ in Concrete featured a mouthpiece whose timbre slotted somewhere between Roddy Frame and Robyn Hitchcock.  Automatically, you could reasonably surmise this would give them a pronounced Anglophile edge, and to a certain extent you'd be correct, but sonically they bear more in common with Guadalcanal Diary than say, the Jesus and Mary Chain.  There's no abundance of mystique to their schtick, which often strikes me as ripped straight from a period 120 Minutes playlist.  Plenty of slicing guitar salvos too, though the songwriting is frequently half-baked, even shoddy at times.  A few tweaks here and there could have worked wonders for their otherwise powerful performances.  Future Men's most convincing moments - "What Is a Fact," "Never Fall," "The World is Ice" would have served CIC more flatteringly if they (and maybe a couple other titles) had been pared down to a consistently satisfying ep, but alas, it wasn't my call. Make of this what you will.

Yeah I had just discovered that Feeling Kinda Froggy blog and a couple months later it was gone without a trace and recall your comments on it disapearance. I sadly did not have the chance to check out those mid-to-late 80's rarities and gems and have regreted it ever since. Thanks for bringing back one of those FKF blog selections that I missed out on the first time around.

FKF was excellent. Makes me wonder if whoever managed it plundered all that vinyl from a college radio station or something.

How are you? Do you have anything by Die Kreuzen, pal??

Hi, could you repair/renew the link?