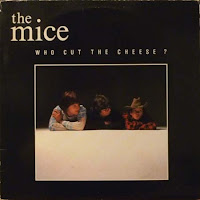 As a quick caveat, this is not the same Mice from Cleveland featuring the talents of the great Bill Fox, rather a trio with origins in Florida, commandeered by Joe Reineke who had greater success with The Meices in the early/mid '90s.  For those of you familiar with The Meices (particularly their early catalog incl. the Greatest Bible Stories Ever Told album and surrounding singles) you'd likely agree with me in a heartbeat they were about as ramshackle and unhinged as a punk-pop band could be while still managing to carry a tune.  That being said, you'd expect a Meices precursor band to sound even more Jerry-rigged...but not necessarily so.  Who Cut the Cheese is not without it's moments of goofy frivolousness (try "New Wave Country Song" or the backwards looped two-minutes of wasted space "Ypupp" on for size), but the Mice were downright competent, tidy even in comparison to the neurotic hand so often dealt by the Meices.  If there's anything the Mice lacked it was the punky verve Reineke's later claim to fame oozed all over the place, but it's hard to complain with driving, melodic keepers like "Pushin' 30," "Blank Day." and "Is it Too Late" slappin' you in the face a la late '80s Soul Asylum.  There's another Mice album, Say No to Cheese that preceded this one by a year.  The band migrated to the left coast soon after the issuance of this platter, soon to splinter with Mr. Reineke trudging forward with not only the Meices, but later Alien Crime Syndicate as well.

Dang, I got all excited that this was something new from Bill Fox and co. Even if it's not, it sounds pretty good so far.

Definitely some solid tracks, but nothing I would go crazy over losing. Thanks for sharing!

The evil that men do ..
Triple Fast Action - Cattlemen Don't.

I also like this alot, definitely not Meices territory. Also happy as this is one more lp of my own I don;t have to rip.

Tho not Bill Fox territory either, he does have a new lp this year called "One Thought Revealed", solo ala Smoke and Byzantium.

I dearly love this album. A billion years ago on KPFK in LA the Friday six a.m. guy would play "Cheap Cigarettes" which motivated me to find and buy the album. Just about all the songs spoke to me in a big way. And they still do. Honest, energetic, with that searching Everyman voice -- 100% recommended.

Hello,
can you, please, repost, this LP?
Thank you very much
Stathis