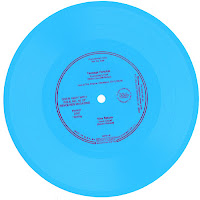 Hard to believe that with roughly 1200 features under my belt this is only the second flexi-disk I've shared to date.  For such a feeble and fragile music format, it's a downright ingenious one at that, considering they're probably cheaper to press up than a CD.  Plus, they take up nary any space even, when ensconced between magazine pages, as was this case with this blue beauty, which could be found in a 1992 edition of Revolver magazine (and also from what I understand The Bob, a periodical that cornered the market on flexi's in the latter part of the twentieth century).  The highlight here is a no-brainer - a live take of an early Teenage Fanclub single, the bittersweet (and preciously vulgar) "Everybody's Fool," from a Cleveland, OH gig.  The audio isn't half bad for a flimsy piece of plastic.  Following the Fannies is Viva Saturn, a spinoff of the Rain Parade featuring the frontman of those Paisley pioneers, Steven Roback.  Their contribution, "Black Cloud" would be re-recorded for Viva's 1995 sophomore LP, Brightside, though I preferred their first EP and 1992's Soundmind.

wow really enjoyed that fannies cut - earl, raw and at their best! thanks

was the 1st plexi you ever posted the Junk Monkeys-Bob magazine track?

No, the first flexi was Let's Active. Run a search for it and it should come up.

I'd love to see a collection of Re-Flex magazine's flexidiscs...had some great, great stuff in the 80s....