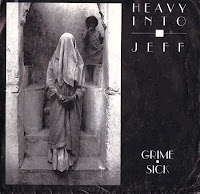 Who the hell was Jeff, and furthermore why was anybody so friggin' stoked about him?   While I'm still coming to terms with that matter, I can at least enlighten you that Heavy Into Jeff was a name occasionally uttered in power pop circles during their mid-90s tenure.  HIJ's pair of albums suggested that the nebulous "alternative" tag might have been more appropriate, given they were heavily prone to riff-rock that often transgressed into flannel territory.   As it turns out, the a-side to this wax, "Grime," is a glorious anomaly - a resonant, harmony laced mini-masterpiece that could pass for the greatest tune the Liquor Giants never committed to tape.  Wowser!   The lengthier and looser flip, "Sick" ain't no slouch either, albeit cut from significantly different cloth.  My apologies in advance for the vinyl static, however if it's cleaner versions of both songs you're looking for, they're available on HIJ's 1995 LP, Fu, available from Amazon downloads and iTunes.  If you like what you hear please support the band!

nice posting. thanks for sharing