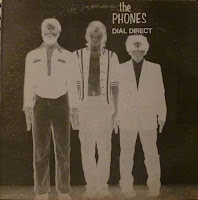 Not to be confused with the slightly more renown Phones from Minneapolis, these Phones, by what few details I have to go by, called Olean, New York home, a small city nestled deep in the state's Western tier.  I found myself in a dilemma of deciding whether to share this with you, given the copious amount of surface noise on my copy of Dial Direct.  When I went to separate and edit the tracks I discovered that some songs had over one hundred very audible pops and snaps.  In a nutshell, I did the best I could within the span of an hour and focused on cleaning up the most satisfactory selections.  With quasi power pop and post-punk inclinations, the Phones phone-in, so to speak, a batch of rather ordinary, though occasionally appealing tunes on this DIY platter.  Two songs (namely "Superstar Living" and "I Just Want to Be Your Man") were so embarrassingly vapid and limp that I came close to omitting them all together.  Dial Direct would have been more effective as an EP, salvaging the entirety of side two, esp the punchy "Fever" and "Commie Love/Cockroach." At best, the Phones vaguely entice a la The Motors, and more negligibly, the Plimsouls.  You be the judge.  By all accounts, copies of this record are very, very scarce.

We are now able to keep a pocket size pc with We everywhere on the go in the form of Blackberry Business Mobile Phone Deals that will enable we to take quick business decisions in fast-paced business environment.

I have this record, in rather good condition. I was born in Olean so it must have come from my dad's collection. Thanks for the info!

Could you please re-up?

Sorry for so many requests. I'm trying to replace my lost mp3 files...