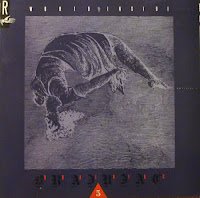 Here's a surprisingly un-anthologized Penzance, UK punk/post-punk outfit that you'd think would have had their meager back catalog preserved in some form or another.  Then again, the bulk of their recordings (collected right here in fact) weren't made public until almost a decade after Brainiac 5 hung it up in 1979.  The arresting lead-off cut, "Working" could easily pass as an outtake from an early Comsat Angels album, and while most of side-A explores vaguely similar terrain, you get the impression that Killing Joke might have taken a cue from these guys had World Inside actually been issued contemporary to when it was committed to tape.  Elsewhere, Brainiac 5 subscribe to a simpler tack, best summed up as a "lite" variation on what second-string punk combos like the Adverts and the Ruts were offering at the time.  Repeat exposure to World Inside reveals that Brainiac possessed the potential to forge a unique identity had they not burned out at precisely the same time the majority of their three-chord contemporaries did.  Enjoy, and if you want to read a far more exhaustive dissertation of the band, head over here.

Read up on the reissue here.
Posted by spavid at 7:02 PM

Brainiac 5 played a reformation gig in london a few weeks back...

Correct you are Jay. I saw that they were playing a reunion show or two on the Brainiac 5 fanpage I linked, but neglected to mention it in the post. Thanks.

B5 are about to issue a compilation CD including the whole of World Inside plus their other 70s releases. They're doing two launch shows in London and a new album is on the way. Get in touch if you'd like to review.

Hi Gerry. Very good news. Think you can set me up with a CD when it comes out? Please email me: trusty73@roadrunner.com.