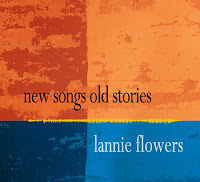 In 2008 a staggering 36-song CD quietly crept it's way into the marketplace - and no, it wasn't a new Guided By Voices or Bad Religion album.  The honor went to none other than Lannie Flowers, a low profile power-pop troubadour from Texas who set out to commit three albums worth of ideas to tape for the ambitious Same Old Story, but as you might guess there was a significant catch.  Each of those three-dozen numbers clocked in at an average of just over a minute.  These weren't four-tracked, lo-fi throwaways mind you.  To the contrary, all were professionally recorded, rather Lannie approached it as a "science project" and merely opted to tease listeners with a verse here, a chorus there, etc.  All things considered, Same Old Story offered some semblance of continuity in spite of each song's striking brevity, but once it's fleeting hooks set in it left some folks hankering "unabridged" versions.  In the years to come, Lannie absorbed enough praise for certain selections, motivating him to "elaborate" on them, which was the genesis for New Songs Old Stories.

As with it's predecessor album, New Songs... came with yet another catch - only seven songs out of Same Old's... bountiful triple-dozen batch would graduate to the three minute plateau.  As luck would have it, the ones making the final cut were aces - "Give Me a Chance," "Tired of Being Alone," and "Another Weekend," among the remainder.  Lannie's traditionalist, Rickenbacker bent recalls everyone from Dwight Twilley to '90s cult figures like Dillion Fence and the Gladhands.  A tried and true formula that accords these songs with an almost timeless appeal, and needless to say, well worth investigating.  In addition to the songs that were introduced four years ago, New Songs... in fact does feature to brand new numbers, "I Didn't Know" and "Come on Girl," the latter of which you can check out below, along with "Tired of Being Alone."  New Songs...as well as Same Old Story, and Lannie's 2010 album Circles are all available from CD Baby and Aaron Ave Records.  Coincidentally, last year I featured a record by Mr. Flowers pre-solo outfit from the mid-80s, The Pengwins.
Posted by spavid at 7:50 PM