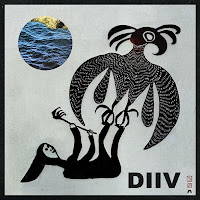 Methinks I've been logging a little too much time in the Twentieth Century time warp, so it's back to the present (at least for a few minutes) to spiel on a current release that's becoming nearer and dearer to my heart every day.  DIIV (pronounced "dive," and spelled that way up until very recently) began as a spinoff solo project for Beach Fossils guitarist Zachary Cole Smith, but in the span of about a year, Diiv's success has nearly eclipsed that of it's antecedent band - no small feet when you consider that the Fossils are pretty green themselves.

Following three recent singles, DIIV's premiere foray into the full length realm tempts like New Order (sans the beats), and moreover smacks of tasty new-jack swillers Craft Spells and the Mary Onettes.  Oshin's merger of refurbished, Anglophile post-punk and mildly woozy dream-pop isn't a revolutionary concoction, but Zachary and his cohorts are dazzling craftsmen, enveloping their audience in a blissed-out glow of Marshall amp sprawl and then some.
If you really want to get down to the brass tacks of  DIIV's formula, sonic aura trumps text big time, occasionally suggesting some of these songs could have benefited from an extra verse or two.  Another poignant facet is Zachary's echo-heavy vocals, which don't dominate, so much as blend in with the band as an instrument unto itself.  "Past Lives" and "Follow" emanate a succulent distorto-chime flair.  Elsewhere, "Wait" and "Doused" meddle with chilly arpeggios amidst an ethereal subtext, with the latter of those two numbers recalling vintage For Against.  Always a plus in my book.  In essence, we have an album on our hands that's befitting a soundtrack to a planetarium laser light show, or a nice cozy evening of chemically enhanced navel-gazing at your crib.  But don't take my word for it.  For the time being you can stream Oshin at Stereogum.com or purchase it from Amazon, Captured Tracks, Insound, and of course, iTunes.