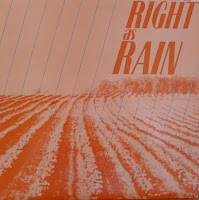 Right as Rain were good as gold on their debut ep.  Cut in Florida, and also released on the small Sunshine State imprint Safety Records, the band actually hailed from Atlanta.  Tellingly inspired by REM, RaR's recipe consisted of modest jangle, plenty of strum, and some rootsy undercurrents to boot, due in part to occasional banjo and mandolin fills.  The archetypical "new south" guitar pop that Right as Rain is, you'd swear Don Dixon or Mitch Easter had a hand in this affair, but not so, rather this fine quartet of songs was produced by Swimming Pool Q J.E, Garnett.  On the heels of this disk came two full lengths courtesy of DB Records, Undertown in 1990, Stop! Look & Listen a year later, both of which sport a surprisingly safe and wholesome tack that failed to make much of an impression on me.  Nonetheless, if any of you are game I'll consider sharing them, but this ep is really where it's at.

Definitely the great lost Atlanta act of the '80s, and I'd go ahead and add UNDERTOWN as one of the '80s best albums--even if this EP was the shining high point of their career. Thanks for helping to spread the word...

hey , any chances of a link for Right As Rain ‎– Undertown , only one missing, thanx

I think I might have Undertown, and if so I'll see about getting it up at some point.

Can you please repost this EP?
Thank you very much
Stathis