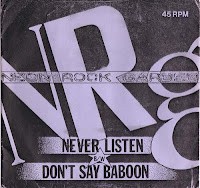 Throughout the better part of the '80s it would seem that Mitch Easter's every waking hour (outside of pursuing his meal-ticket, Let's Active) was spent producing/recording other bands.  From an audiophile's perspective this was a wizardly, and ultimately thoughtful move on Mitch's part, lending his acumen to scores of records that bear his name in the credits, including this beaut.  Neon Rock Garden were a co-ed trio based in the small North Carolina town of Hickory.  As of this writing I have yet to hear anything outside of these two NRg tracks, which offer a none-too-subtle wink and a nod to that aforementioned "meal-ticket."  Nevertheless they put their own spin on the New South trend-Du-jour, especially on the fevered "Don't Say Baboon," gushing forth a flurry of delirious, jagged arpeggios, and a guitar tone that nearly mimics the trademark leads of U2's The Edge.  The stuff of Wilfully Obscure ideals for sure.  The equally winsome A-side, "Never Listen" charts a slightly more contemplative trajectory.  I'm thoroughly rejoicing over this 45.  With any luck, in the weeks and months to come, I may have more NRg to share (that's right, keep your fingers crossed and I'll do the same).

Competition on Ebay is a bitch, especially for juicy morsels like this. Judging by my cerdit card balance I'd do well to steer clear of that site. Ixnay on the Ebay!

I remember NRG, I used to live with one of the members. They were a really good band, a staple in the early 80's Punk scene in Charlotte and the surrounding areas.

I remember NRG, I used to live with one of the members. They were a really good band, a staple in the early 80's Punk scene in Charlotte and the surrounding areas.

Ha, I've actually got a copy of this single on vinyl. I didn't think anyone else had heard of it.

I have seen NRg several times while living in Hickory NC. Hubby worked at the Record Bar (when VINLY still rocked!) and some of our best friends were the groupies..*grin
GREAT TIMES and GREAT MEMORIES.

I live in Hickory NC and was friends with all the band. I have all their stuff. I believe their was another single, I'll look it up. Theirs a Facebook page NRG , which has all their recordings. Live shows were great. Another local band that were great was BLARK. Later Tina was in a band called Tomorrow's Party.

Hey Thasoulmanshaus. Thanks for commenting and sharing. I've been in touch with some of the NRg alumni, including Tina, Mike and Gene! Mike set me up with files of the Perfect Sounds tape, and I was lucky enough to find original copies of the singles (two of them anyway). Tina and Mike are on FB, haven't talked to either in a long time. Do you know if tapes of any live NRg shows exist? Hope to hear from you again.