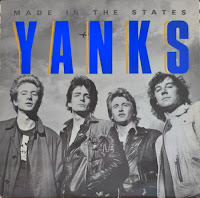 The net cast by the major labels in the midst of their '80s signing spree apparently wasn't wide enough to capture San Fran's Yanks, who released two independent eps, this being the second, with their debut, Only Lovers Left Alive issued one year prior.   This fairly straightforward guitar rock quartet kicks things off with the club-ready, "Tell Me No Lies," constructed around a shuffling, APB-style rhythm.  It's all uphill from there, with a clutch of airwave-tailored pop-rockers including "Run," "Reason to Try," and "We Call Each Other Mine."  The sobering title cut brings this affair to a tasteful conclusion, but truthfully, I was expecting this record to possess a grittier edge.  The Yanks have a page on ReverbNation, hosting a veritable box set's worth of demos and live recordings, along with tracks from the two eps I've spoken of.  If only all the bands I write about were this thoroughly archived...

awesome. never looked at reverbnation before, but i wish it was laid out better. always preferred svt over yanks too, but it's nice to have digital versions of this now.

I agree. I preferred SVT over the Yanks. Sorry I didn't make the connection to the bands in my write-up.

I want to thank you for this post. This information was very helpful.Please keep up the good work and I look forward to more of your great posts!Jah Rush

Angelo I remember it differently...Das Block first, then Yanks, then Jack joined SVT which if my hazy memory serves was already going strong. I was at the first Das Block gig (The Palms). I remember 'cuz they opened for my boyfriend's band and impressed everyone. Personally, I preferred Yanks over SVT because of Owen. :-)