John Mac and the Moraggots (of Marshal Fields) 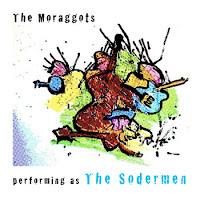 Granted it was a good quarter-century after the fact, this January I became a belated, drooling fanboy of a long departed Bay Area group called the Marshal Fields, and I shared my discovery with the world at large, not knowing a stitch about them outside of the seven songs populating their lone mini-LP.   I was hoping someone would chime in with some crucial details on the Fields, or at the very least offer an insightful anecdote or two.  To my good fortune I was treated to both, in spades in fact, by virtue of co-frontman John "Mac" McClellen contacting me personally.  It was a pleasure not only to inquire about his old band, but to learn that Mac was still musically active, even if his recent endeavors don't necessarily echo Marshal Fields angular, power pop roar. 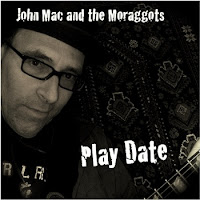 Operating under the moniker The Moraggots, and enlisting the assistance of former Fields percussionist Mike Spinrad on various songs, Mac's most two recent albums, 2008's Performing as the Soldermen and '09's Play Date, reveal an unplugged, everyman troubadour indulging in homespun ethos aplenty.  Opting for a spare, organic template patched through a predominantly acoustic delivery system, our man takes queues from a variety of singer/songwriter mainstays including Bob Dylan and Elvis Costello yielding a bevy of sweetly plucked tunes, often folky and even a little twangy.  Ballads reign here, but they're hardly the stuff of dry ice-laden music videos, teased hair, and raised cigarette lighters...if you get my drift.

Both of the aforementioned disks can be streamed and purchased digitally on the Moraggots Bandcamp page (hyperlinks provided above), along with an even more recent collection of songs.  Play Date and Performing as... are also available digitally through CD Baby, Amazon downloads and Emusic.

Thanks for the review!
- Mike Spinrad