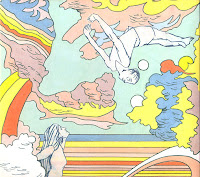 It was just six years ago that I pinned my hopes on this new-ish Scranton, PA four piece, whose deftly composed indie pop was a synthesis of some of the previous decade's smartest offerings.  A 2004 ep, Hunk, preceded The Cactus Has a Point, but after another ep in 2008, Okay Paddy were ostensibly splitsville.  Had Cactus arrived a couple years later than it did, Paddy just might have blown up like Rogue Wave or Beach House.  Their official website is unfortunately kaput, but the band has a posthumous presence on Myspace (linked above).   Okay Paddy prime-mover Mike Quinn made his solo album Magico available on Bandcamp last year.  You can read the review of Cactus I penned many moons ago for Big Takeover magazine below.

It’s a diminishing phenomenon, but every so often an album will come out of left field that once again reaffirms the audiophile in all of us why we go to such lengths to excavate a gem like Okay Paddy’s debut The Cactus Has a Point.  Whom does this visceral indie-pop quartet take their collective cues from?  Take your pick: The Bigger Loves, Sugarplastic, Pavement, A.C. Newman, Telepathic Butterflies, The Shins – and that’s just grazing the surface.  Okay Paddy marry their scrumptious power pop with carefully measured amounts of quirkiness and sassy enthusiasm to make a convert out of anyone with respectable taste in contemporary indie-rock. Cactus offers ten short and sweet, three minute nuggets emanating surprising depth and robustness given their brevity.  Lay your ears on “Time For a Tailor,” “You Never Worry,” and “Oo-Man, La-World“ and prepare to become a believer.

Listened to this one twice at work today. First time it was humming along at an "ok, i get it" level, then the recordings really started to grab my attention (as I struggled through a typical Monday). Second play, later in the day, I was recognizing some of my favorites.

This could really grow on me.

I had the exact same experience. This one grew on me quickly.

Gawd, I was just listening to this again (forgetting what it was), and I was like "hey, this is REALLY good." I am just amazed. This is hitting me now as some of the best "power pop" that I have ever heard. Right up there with the Mayflies USA, Cavedogs, Splittsville, Myracle Brah, etc.

It helps that they can crank up the guitars!

Can you re-up? Link seems to be dead.

Thanks for recommending this one. Really enjoying it! Any chance you plan on featuring "Hunk"?

Hunk and Cactus together as a single piece of work would be the best power pop record ever, in my opinion. Amazing musicianship and songwriting.