Chris Richards and the Subtractions - Get Yer La La's Out (2012, Gangplank) - a brief overview 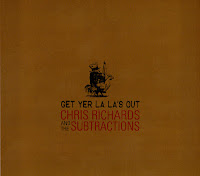 A couple months ago when I was introduced to a nationally unknown Detroit-area export from the late '80s, Hippodrome, there was a name in the lineup that rung a significant bell.  It turns out that had I already been exposed to the solo offerings of Hippodrome's figurehead, Chris Richards.  In fact a compilation of his work in Hippodrome, The Pantookas and beyond, Pathetic History 1990-2000, had already made an impression on me a decade prior.  With a penchant for linear yet savvy power pop Richards hasn't exactly been perched on the cutting edge of his chosen genre, but much like Tommy Keene, his songs beam with an irrepressible Midas touch.  That was certainly the case with 2009's Sad Sounds of the Summer, the first album credited to his latest assemblage Chris Richards and the Subtractions, a trio also featuring one of his Hippodrome henchmen, bassist Todd Holmes.

Get Yer La La's Out is the slightly more assertive yin to Sad Sounds' brighter, goes-down-easy yang.  With ten (or eleven if you take the vinyl route) short but sweet nuggets, Richards proves once again he's a thoughtful steward of quality control.  This time out, the band have created an album that's just as much Buffalo Tom and Dillon Fence as it is Matthew Sweet and Velvet Crush.  La La's... is guitar pop perfection on a stick, without any of the cotton candy fluff.  Wherever the needle or laser lands here is likely to yield a blissful result, but I'd start with "Don't Do Anything Tonight," "It's Something" and "Uncertainty."  You can stream the whole thing from their Bandcamp site, and if you like what you hear buy a physical copy at CD Baby or through Chris Richards and the Subtractions website.
Posted by spavid at 8:30 PM