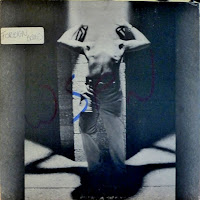 By the looks of things, Foreign Bodies were denizens of one of my favorite '80s hotbeds, North Carolina, perhaps Durham in their case.  There's more than a modicum of the "new south" sound permeating the bulk of these grooves, but amazingly F/B had no involvement from Mitch Easter and Don Dixon, at least not on this record.  The Bodies roster consisted of three men and one woman.  Guess who carried most of the vocal heft?  Going by the assumed name of Sonar Strange, the world may never know her true identity, but her pipes color this affair in much the same way Salem 66 and Throwing Muses were all the better for having the fairer sex occupy the mic.  Guitar-wise, you'd think that Peter Buck had his fingerprints all over this disk, save maybe for the concluding rave-up, "Ride Sally Ride."  Impressive.  Yet again I present another record sleeve marred by ID designations of a left-of-the-dial radio outlet.

Some info from the drummer Ian Davis:

"...Foreign Bodies grew out of The Pound Notes. I answered an ad and started playing Pete Stapleton's songs. Sonar sung 'em, I drummed, Zingo Munger played bass. They were what they were. If they didn't work for you or anybody else, why did we keep getting gigs for three years? Why did you, Tim, book us twice in the club you managed in Greenville? I guess, in part, because we had a full club the first time and people seemed to be buying lots of beer. Why did Andy Dunker (Rockpool) and Option and others like the record (whatever the cover). I think each of us wished that the band would become something slightly different (me, more improvisational, sonar, quieter, Dan, more like europop(maybe), Pete, ?), but we worked hard and if it didn't happen, so what? It was '84-'87 and then Good Neighbors (Randy Pelosi and Todd Barbee) happened to me 3-4 nights a week for three years. And then Blue Chair (Trent Hill and Chris Eubank). And then Eddie/Bicentennial Quarters (Chris Eubank and Walker Martin. And then Mind Sirens (Brian Butler and Mike Barker. And then Trailer Bride (Melissa and Robert). And also Chris Stamey/Kirk Ross (w/ Brent Lambert and Rick Brown and Stacey Guess and Ed Butler, among others). And also the North Carolina Jazz Ensemble. And also the ArtsCenter jazz jam. And also some Blue Green Gods gigs. And two Gomez gigs. ..."

Thanks so much for sharing this email! It sheds way more light on the Foreign Bodies than I was able to.

Yeah, had some rare time to kill :)