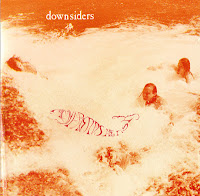 I recently had a request for this one.  Some four years ago when I unleashed a digitized incarnation of the Downsiders eponymous 1987 album on the masses, I merely liked it but have grown to love it.  As it would turn out, this Chico, CA four-piece had the drivin' and chimin' indie-guitar rock thing going quite dexterously, not far removed from the realm of Bleached Black and Carnival Season (references far too obscure for most of you, I know).  By the time the Downsiders took the reigns for their second and final record, All My Friends Are Fish, they opted for a slight detour, wherein varying textures and shifty moods wafted into the sonic ether.  There are several moments here, particularly in the first half, that graze the fringes of the Paisley Underground circuit which was in full gear a few hundred miles due south in L.A.  Even so, the Downsiders tended to favor the darker side of that coin.  Ranging from the sobering, reflective strains of "Ode to Traci" to the comparatively raucous "She's Alright," and even a droll reinterpretation of the Modern Lovers "Pablo Picasso," ...Fish swims through relatively disparate waters, but doesn't necessarily exceed the strength of the 'siders sterling debut.

Point of order - The Downsiders were from Chico CA, not Chino, Chico

Bad typo on my part. Thanks for clearing that up.

I remember this record vaguely...must have owned it at some point. And will again, thanks to you! Thanks!

Thanks for this post because it led me to the original post of the earlier LP. I'm listening to it right now, and I think it also could be one that just keeps getting better for me.

When I get a chance, I will check out this newer offering.

P.S. But did they WEAR chinos?

i think this second LP is far superior to the first! One of my favorite LP's of the 80's. And if there's any chance of re-post i'd definitely appreciate it!

Hello, Would there be any possibility of a re-up here? THANKS for all you do