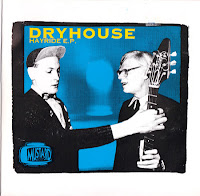 Now this is cool.  Yet another cold case, but it's a good 'un.  The only online reference I can conjure up for this record suggests that the charmingly ramshackle Dryhouse were a hybrid of the Doughboys and Dag Nasty, but I don't buy the first half of that combination in the least.  Instead, try mid-80s Soul Asylum, and if you must usher Dag Nasty into the equation, we're talking shades of Wig Out at Denko's at best.  The songs are quite excellent, especially the two on the a-side of the coin.  No correspondence address is provided on the insert, but we're offered a couple clues that Dryhouse may have originated from Rockford, IL, or thereabouts.  First, this disk was cut in 1990 at Underground Noise Chamber, a recording studio in said town.  Furthermore, the record sleeve depicts Cheap Trick's Rick Nielsen on the left, grasping the neck of a guitar from an unidentified man on the right.  As is common knowledge to many of you, Cheap Trick hail from Rockford.  If anyone has the proverbial dirt on Dryhouse, comment as you see fit.

A1. I Remain
A2. Then Again
B. Haunted Hayride

Definitely Dag Nasty in the guitar and a little American Standard/ Garden Variety New jersey love... I think the guy on the right is Andy Warhol

Andy Warhol huh? Never occurred to me. Guess I've only seen so many pictures of him.

If anyone is interested in buying this 45. Just put up a listing on eBay to sell our inventory we have been sitting on for 20 years.