"I could make a horse's head of all your friends..." 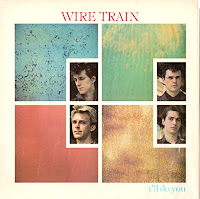 Of the quintet of 415 Records acts that made the migration to Columbia (Sony) Records in the mid-80s (which included Romeo Void, Translator, Red Rockers and Until December ) San Fran's Wire Train weren't an initial priority, but upon belatedly hearing their first LP, 1984's In a Chamber a few years ago I was sold in a heartbeat.  Theirs was a dreamy amalgam of driving jangle rock and new romantic subtlety, with Chambers crown jewel casting itself in the form of "I'll Do You."  It's sublime sway is nothing short of transporting, marrying a hook of staggering proportions to an irresistibly propulsive back beat.  Wire Train shot a primo video for this single, which you can see below.  The b-side "It's Only Dark" is exclusive to this wax and is par with just about anything on the aforementioned album.  True, it lifts a well known Mission of Burma lyric, but it works so well I'm inclined to forgive them for copping it.  In a Chamber and WT's 1985 followup Between Two Words were paired on a 1995 CD reissue, but I'll be damned if you can locate an original copy, which was seemingly in print for ten minutes.  A Wire Train fansite with a thorough discography and so forth is linked above.

Thanks for sharing..
So Good!! B Side

Love this band. Caught on with Ten Women (awesome 3rd record) and kept up til the end. Saw them open for Live in the early 90s. I have a buuunch of unreleased stuff if anyone wants it. Let me know.

I have a couple of folders of unreleased WT recordings titled Trail Mix. Was this what you were referring to 96ataxic? What I'd really like to hear are any demos or recordings that predated the first two albums.

Trail Mix is a bunch of No Soul No Strain demos. I have that and also an unreleased 6th album called Snug. And btw this is TwistedWrister from soulseek..

Thanks for the rare b-side. I never got to see this band but I love all their releases. I know they did some California only reunion shows in 2009. Maybe someday...