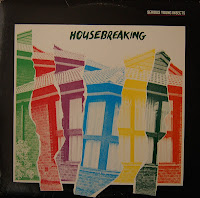 It wasn't until a few weeks ago that I became acquainted with this Melbourne, Aussie lot - some three full decades after the fact.  Talk about arriving to the dinner table late.  Despite a major label pedigree (restricted to Oz anyway) Serious Young Insects didn't seem to make a huge dent in their homeland, and you can write off the States entirely.  After checking out the video for "Be Patient" (featured below) a feature track on Housebreaking, I became an instant convert, falling prey to it's plush, power-pop by way of tasteful new wave maneuvers...and a devastating hook that most bands would sacrifice a collective left nut for.  As for the video, "Be Patient" would have been quintessential MTV fodder of it's era, slotting in perfectly amidst a myriad of genius one-hit-wonders, but again, the album and single failed to make it stateside.  My theory?  Things might have gone in the Insects favor had Epic not been flexing all of it's marketing muscle behind Men at Work, but I digress

The trio's Myspace bio stresses that with it's über-slick production, Housebreaking failed to serve SYI justice stacked up against their live performances, which from the sound of it were plenty potent.  Sonically, the record's rich, state-of-the-art sound is still a pleasure to listen to, and perhaps even edgier that I'm leading on, but the songwriting is woefully deficient.  Despite receiving lyrical input from all three Insects, many, if not a full half of the cuts dotting Housebreaking's landscape are demonstrably underwritten and/or laden with half baked ideas that had yet to fully gestate.  One egregious example is "I Want Cake," which for most lesser bands wouldn't even qualify as a b-side.  In it's entirety, Housebreaking is still an impressive listen, just a bit frustrating in the lyrical department.  To my knowledge there are at least three SYI singles floating around out there (which I'd love to hear along with any unreleased studio material), and the group's Myspace page has five additional cuts (some live) that can be streamed.  If anyone cares to chime in about the Insects, comment as you see fit.  A big shout out goes to George for sending me these files.

any chance in the world of re-upping this somewhere ??

I second that request. A re-up would be most appreciated.

A Girl Who Was There said...

Chaps: "I Want Cake" was always heavily demanded by the big crowds (esp hometowm Melbourne), who loved it and would hoot for it from Gig Open, and even snag an unwitting Insect enjoying the previous band, or during the break, to make the same request. Some punters thought it was called "I Want Kate". It was a little dig at disco (the funky), and very serious about Peter's Mum's Best Ever Chocolate Cake. So - not a lame "sub B side" in any sense, but a highly-demanded crowd pleaser at live gigs - and if one was an Insects fan... and there.
From A Girl Who Got Some Cake

I received a copy of this LP as part of a gag gift at a christmas party around 1987 or so. The fellow who gave it to me hosted an Australian exchange student who brought this record with her. He teased her about it to the point that she gave it to him when she left. I in turn received it from him as a gag when i was about 15 years old and fell in love with it. Years later when I ran across Peter Farnan on MySpace I recounted the story to him and he replied and told me that they had quite a bit of live shows recorded to tape that they wanted to eventually transfer to digital.

Thanks tex. You can find quite a few SYI live videos and even some demos floating around on YouTube. I was informed that the band really wasn't satisfied with the album, and even worse, there was little to no chance of a reissue.

can you please re-up this? thanks a lot!

I would love a re-up too.