A moment or two with Shark Tape 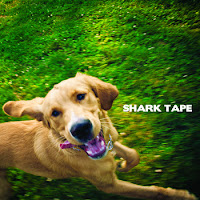 Ostensibly named after a device for dispensing tape to bandage athletic injuries, this Philly three-piece bear a sophisticated sonic wallop that thoroughly belies their arcane moniker of choice.  Before I took my cue to check out their Bandcamp page, I anticipated Shark Tape to be a bunch of wet-behind-the-ears youngsters, fixin' for some freewheeling, power-chord revelry.  Instead of finding them in warm-up mode, I was heartened to reveal a band that had fully and unmistakably arrived, utilizing every ounce of potential they could muster.   If the fluid, echoing chords and inviting harmony that introduces the bristling "Ambitions of a Lifetime" aren't enough to cast you under the Shark Tape spell it's safe to say nothing will, at least in this day and age.

The four songs within explore the same gleaming textures that Interpol have made their calling card, sans that group's stiff pomposity.  Dare I say the '90s would have been a lot more interesting (and tolerable) if U2, post-Achtung Baby, had explored a similar vein to Shark Tape?  Luckily, ST have their own regal flair to boast, one with brains and a heart.  I'd be remiss if I didn't mention that I'm also hearing echoes of such sweeping UK guitar acts of yore as Adorable and Power of Dreams.  "Put Those Things Away" is just as wide-eyed and alluring as "Ambition," while "Eyes of Mercy" floats a brisk, naggingly-jagged rhythm into the mix.  By all means, keep an eye on these guys.  Shark Tape's ep is FREE (for now) on Bandcamp (linked above), and can also be had at iTunes and Amazon.  You can even like them on Facebook for good measure.

Thanks for the Update.