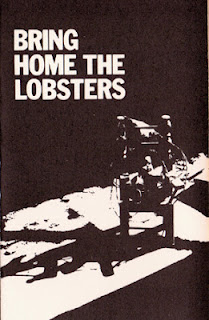 For the three or four of you reading this who have any firsthand familiarity with Bring Home the Lobsters, I'd politely suggest you not get your hopes up.  To what pre-tell do you owe this caveat?  While my source tape is a 100%, bona fide original copy, it's either been played to death or naturally deteriorated over the course of it's 26 years.  I'll delve a little further into said fidelity deficiencies in a few moments.

As I'm wont to do, I was browsing a seller's list on Ebay at some point last year and stumbled across this curiously named cassette.  Did a quick Google query and learned BHtL were a mid-80s hardcore outfit from Eau Claire, WI, and with the few pertinent matches I was able to conjure up, they were sometimes mentioned in the same breath as Husker Du, Breaking Circus and Big Trouble House.  Nice.  Naturally intrigued, I placed my bid and won, but didn't get to listening to it until this past week, nor did I take a closer inspection of the liner notes beforehand.  It turns out that this affair was engineered by Steve Björklund of Breaking Circus renown.  The plot thickens.  Lead Lobster Phil Harder would join Björklund and Co. for their Smokers Paradise ep in 1987, not long after this tape was recorded.

BHtL weren't cookie-cutter punks, but some of the more "routine" songs in their repertoire ("Violet Actions," "Tar and Feather," "Northern Colony," etc) certainly bordered that periphery.  Fortunately they compensated with a generous amount of diversity among quite a few of the remaining numbers, most startlingly in the shape of the relatively ambient instrumental "Desert Song."  The quartet saves their aces for the second half of the show, with two particular standouts.  "Poetry" exhibits serious power pop flirtations a la a rawer, more muscular Mitch Easter production.  It gets better.  "What I Believe" is this tape's crown jewel, bearing a classic Bob Mould-inspired guitar workout, nearly passing for a primo Metal Circus or Zen Arcade outtake.  Brilliant.  Luckily. these two numbers appear on side two (tracks 7-12), which sounds demonstrably more lucid than this tape's preceding first half which is far too muffled and bassy.  I tried to play around with the equalization, but all the tweaking in the world won't substitute for a cleaner tape.  There's yet another snag, and a fairly significant one at that.  When the reel on side two ends, so does the last tune ("When Mommy Comes Home Drunk") midstream.  Even so, you get a good ninety seconds of it.

Something about these recordings fascinate me to no end, and I'm still trying to put my finger on it.  If anyone can shed any light on the Lobsters, and/or provide me with an upgrade of these songs, don't be a stranger.

Wow, I don't think I've ever heard of this before. I might have to check this out.

Cool. Let me know what you think.

Amazing. I saw these guys play in the back room of some bar in downtown Minneapolis in 1986. The next day I went to Oarfolk and bought a cassette of theirs that has at least some of the same titles (that I recognize anyway--I'll have to dig the tape out) but that was on Dicklefritz Records (or something like that--the memory fades with age). Thanks for posting this--gives new meaning to the word "obscure".

I saw them a handful of times. I'll see if I can dig out the cassettes I have.

I am currently looking at the BHTL tape my wife has. It is the Dinklefritz Records tape (#279!) and has "Northern Colony", "Not Waiting", "Always Smiling" and "Desert Song" on side 1 and "Bigot Shuffle", "Mc Punks" and "Multiphasic Personality" on side 2. Haven't put it in a machine in years, but I recall the recording quality of this tape is also way below anything you would consider listenable. Some great songs, though.

I would sure love to get a tape of the Lobsters. I used to listen to them in the early 80's when someone brought one of their tapes to us in Medford,WI. I have been trying to get my hands on one for 20 years. I can still play one of the songs over and over in my head. Please respond to me at wyatt.krug@pieperpower.com. I would be very appreciative.
Thanx!

The link has been updated folks.

Link has been updated again.

Just about funnest time I ever had.
Thanks for listening.

I had a copy of this great tape dubbed off from a friend that was from Eau Claire. I listened to that tape for years. I love it. Unfortunately my copy got destroyed about 10 years ago, and haven't been able to find another copy to buy

Will get a revised and active link up soon. Thanks Greg.