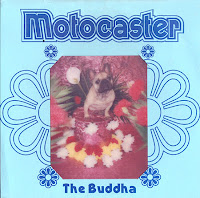 What would possess a promising, upstart rock band, circa the early '90s who happened to hail from the indie hotbed of North Carolina to swipe their moniker from perhaps the most recognizable telecommunications manufacturer of their era?  A great deal of gumption and freewheeling bravado would be my guess, but life for Raleigh's Motorolla would be fairly short lived, at least under that guise.  Rechristening themselves as Motocaster for utterly self explanatory reasons, the trio would rack up a couple singles and an ep before being scooped up by Interscope, for whom they recorded their sole full length, Stay Loaded.  You might say for every Nirvana there were twenty Motocasters, and this trio's lack of a solid promotional arm imminently spelled bargain bin.  For shame, because sonically speaking, that woefully under-promoted album cranked.  "The Buddha" (also appearing on Loaded) packs an angular, but addictively saucy riff, leading into a noisy, power-chord ridden maelstrom that would do anyone from Blue Cheer to Sonic Youth proud.  Sizzling stuff.  The other side of this coin reveals a faithful cover of the Lemon Piper's 1968 psych hit "Green Tambourine."  The second b-side, "Motorolla Greens" is an improv jam, and largely a throwaway, that ultimately isn't much to Motocaster's detriment.  BTW the pic of the dog gracing the sleeve of this wax is actually in 3D, though my scanner has difficulty negotiating images of that sort.

I'm hardly expecting any of you to remember this, but in 2008 I shared a three-way split LP, Fish Hips & Turkey Lips, with Motorlla, Small (23) and Finger which is still available.  Motocaster fulcrum Bo Taylor was also involved with the slightly more demure Dish, who I also dedicated some Wilfully Obscure space to many moons ago. Last but not least, Bo was the guitarist for Eight or Nine Feet who were responsible for this record.

A. The Buddha
B1. Green Tambourine
B2. Motorolla Greens

I saw Motocaster once, probably like everyone else did, when Fastbacks opened for them in '95.

Just posted this myself....great tune in the Buddha. I like what you have to say better than what I did. You wouldn't happen to have the Stay Loaded LP would ya? Thanx

I do have Stay Loaded. I'll see about posting it at some point. Thanks for mentioning Wilfully Obscure on your blog.