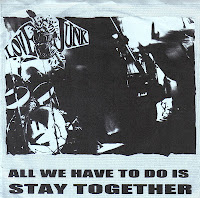 Roughly ten years ago I belatedly discovered an uber-obscure '80s Brit punk act, Perfect Daze, by virtue of an anthology type retrospective, Five Year Scratch issued by the ever thoughtful Boss Tuneage label.  So impressed was I by their low-fi acumen, sprawling energy, and melodic aplomb I sought out original copies of their two eps, Bubblegum and Regular Jailbreak, which I shared in full back in the waning days of 2009.  Splendid stuff, but I really hadn't given them a second thought since I made said entry.  A few days ago however, one of my most astute followers from across the pond informed me that six-stringer Scruff Myers and bassist Wolfie Retard (no relation to Jay) eventually founded the band Lovejunk once Daze were decommissioned.  Some MP3s were exchanged, my stringent eardrums were satisfied, and the result is his post featuring their first two EPs.  LJ subscribed to a similar ethic as their antecedents, albeit taking advantage of superior studio gear.  They can best be summed up as a merger between Mega City Four and the Replacements, occasionally inviting the Senseless Things to a round of drinks. 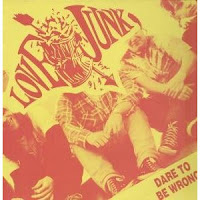 At their most convincing, particularly evidenced by "Paperboy," "Death By Smiling," and "We Can Win," Lovejunk didn't supersede the lofty comparisons I mentioned, but were still highly gratifying.  Both of these ep's conclude with spare acoustic numbers, winding things out in significant contrast to the more rigorous slammers I just made note of.  Another ep followed, Vodatumour Blues, which I might attend to later, and so did two full lengths that I could really use some help locating.

A big thanks goes out to Duncan for setting me up with these files.  Enjoy.

How I'd love to have all of theirs.

And yet any of Crackle! would be fine too!!

Any chance for a re-up in your next batch of link updates? Just heard via Neal's blog and they are fantastic!