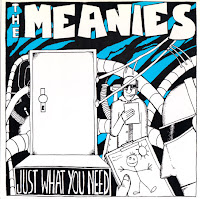 Had I the option to document music online in the early '90s, or more accurately given the era, were I to have published a fanzine, Melbourne's Meanies would have been a top shelf priority.  For us few Yanks who were fortunate to have encountered their only stateside long-form release, 1993's Televolution hodge-podge CD on eMpTy Records, we fell under the spell of this motley Australian cabal in a heartbeat.  The Oz edition of Rolling Stone summarized the band's mission statement to a T:

The Meanies songs, "will all be short, between two and three minutes every time. Each burst of savage punk/pop noise will also be a potential anthem; an unclean riff with a beating heart of pure melody."

Quite frankly, the Meanies wouldn't have sounded like the Meanies without the existence of a certain quartet of "brothers" hailing from Queens, NY.  By the time these singles came out at the dawn of the Clinton-era,  they were outdoing Joey, Johnny, and Dee Dee in colossal fashion, all while those three gents were still walking the Earth.   In fact, some of the Meanies compositions rivaled the heaviness of the Ramones circa Leave Home.  At one point during their '90s tenure, the Meanies featured two guitarists, which might account for their barreling, sonic blitzkrieg.  Mouthpiece Link Meanie is the heart and soul of the group, possessing just the right set of lungs for punk rock this visceral and voracious.  Sadly, in 2008 the Meanies tale was becoming shrouded in tragedy, with the separate passings of guitarists Tas and DD. 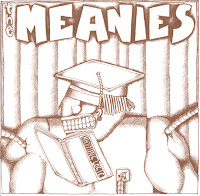 The Meanies discography is likely to intimidate even the staunchest of completists, myself included.  Not so much in the way of albums, but an overflow of singles and compilation appearances.  The two 45s presented here may not seem like a lot, but they're a decent starting point, with ninety second (or thereabouts) salvos like "Operator" and "Dark Side of My Mind" representing quintessential Meanies.  Surely other music scribes have written and/or shared music by them, but further mis(adventures) may appear on Wilfully Obscure in the months to come.  A brief synopsis of the band's career to date is available on Wikipedia.

Awesome...i had completely forgot about The Meanies! A buddy had made me a mixtape (remember those days...) with various Meanies tracks and these 45's always seemed hard to find and/or out of print! Wally continued on in the criminally underated Aussie band...Even.

I hope I don't like this band, otherwise my OCD will kill me.

I've heard of Even. Think I have a CD by them that a reviewed for a magazine awhile ago. Total departure from the Meanies from what I recall.