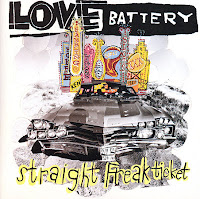 Though they were never an overwhelming favorite of mine, I enjoyed Love Battery's body of work for Sub Pop, especially 1993's Far Gone.  Two years later when Straight Freak Ticket dropped, on a major label no less, I was less than freaked out in terms of my adoration for it.  Love Battery were still plenty wiry and had even retained an air of their dense arrangements, but the psych-punk inclinations that had reverberated through Dayglo and nascent singles had been smoothed over a little too much for my palette.  After revisiting SFT a decade and a half later, I've concluded that my judgement in my junior year of higher education may have been a bit hasty.  Indeed, there were some spirited standout moments lurking on here after all including, "Red Onion," "Perfect Light," and "Harold's Pink Room."  For the novice, I would still recommend getting your LB indoctrination from their 1989-93 Sub Pop heyday (all in print via the usual trifecta of paid digital conglomerates).  And btw, they don't sound a stitch like the Buzzcocks.

You have to love Love battery. While this album is definitely a pearler, you are right to say that some of the earlier releases perhaps capture what I always thought was a perfect balance of the shambolic and the dramatic. For me, Dayglo was both the pinnacle and an epiphany.

This is the 1st album I listened to of theirs,never been really able to get into it.
Then kinda forgot about them till I found Dayglo cheap and I love that album.I'll have to dig out SFT and give it another spin.

Info is out of this world, I would love to read more.
unbiased

I really like this enthusiastic job you are doing folks.
recipes for pasta salad

I would be pleased if all WebPages provided such articles.
Get more info about You Eco

Hi guys, the articles written in this blog sites, these are truly amazing regarding people knowledge well.
Welcome to Derry Chat

I am truly keen of reading posts on the attention-grabbing topics n now I'm on the most effective place.Relationship Tips by Hnn X size

Thanks for your beyond belief blogs stuff. Healthy Relationship with Miss Finicky

Bundles of thanks for providing such kind of blogs with the informative and impressive articles. ppi

You are doing the very nice job guys by your efforts people will get much knowledge on the latest things well.
grocery coupons

Nobody can reject the info you have given in the blogs, this is actually a great work.
Advice by Better Gas Mileage

The information in this blog is extremely useful for the people.
affordable life insurance

This webpage is containing a pleasant stuff with the teachings, I loved it a lot.
infographic design

I was getting bore since morning but as soon as I got this link & reached at this blog, I turned into fresh and also joyful too.
good infographics

Enormous blog you individuals have made there, I entirely appreciate the work.
infographic

Outstanding blog, in my opinion site owners should acquire a great deal out of this blog its very user welcoming. infographic design

Great details here, better yet to discover out your blog which is fantastic. Nicely done!!! social media infographics

Great details here, better yet to discover out your blog which is fantastic. Nicely done!!! infographic design

It’s amazing in support of me to truly have a blog site, which will be valuable meant for my knowledge. Thanks admin.infographic design

Great details here, better yet to discover out your blog which is fantastic. Nicely done!!!
blood sugar levels chart

I feel really finicky reading these articles I mean there are writers that can write reasonable stuff.
life insurance rates

I’m trampled by your contents carry on the wonderful work.auto insurance

This blog post is really great; the standard stuff of the post is genuinely amazing. car insurance quotes

The stuff written in the blogs have allured me!!! auto insurance quotes

It’s amazing in support of me to truly have a blog site, which will be valuable meant for my knowledge. Thanks admin.
best weight loss foods

Highly vigorous blog, I liked that much. nemesis mix color

Highly vigorous blog, I liked that much. nemesis mix color

I’m glad to locate so much of informative data in your blog. comment pirater un compte facebook


Very efficiently written information. It will be priceless to anybody who uses it, together with myself.bubblegum casting

I'd purely tell you all “awesome information”anonymous vpn

I truly get pleasure from while I read your blogs and its content.

Congrats you individuals are doing with this blog site.

This is a great post; it was very edifying. I look ahead in reading more of your work.

If you are being attentive to learn several strategies then you ought to browse this article, I am certain you'll get much additional from this article.
repair credit

I wanna thanks to a great extent for providing such informative and qualitative material therefore often.

Thanks you have provided the nice blogs for us, I am glad about you.
electrical contractor brisbane

I never ever read such type of info before this was really incredible.

I really enjoy reading and also appreciate your work.Villas marrakech